THE LESSON OF THE TOY BOX 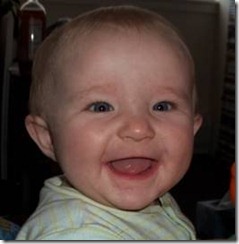 We got to spend this past weekend with my granddaughter, Amaria (AKA Twink). She’s a lot of fun, even though she decided that she should not let her papa sleep on the Saturday night before Easter Sunday church. Admittedly, that part was a challenge, but that wasn’t the worst part. Let me tell you what really bothered me.

Amaria is one now, and as with most children her age she is into everything. By the time it was time for her to go home with her parents she had practically turned our living room upside down. Toys were strewn everywhere and there was barely a bare spot on the floor to put my foot on. So, as it was getting near time for her to depart I said, “Amaria, clean up this mess.” Amazingly she didn’t even seem to pay attention to me, so I repeated myself a little louder. At least that time she looked at me for a moment, but went right on playing and messing things up. So, a third time I repeated myself, only this time with great sternness. She stopped and looked at me puzzled as though waiting for something else to be said or done. Then, believe it or not, she went right on playing and making even more of a mess as if I weren’t even there.

She didn’t clean up. She didn’t even try to clean up. In fact after she left I was the one stuck cleaning up her mess. Fact is, at one year old she doesn’t have any idea what clean up time means, nor is she able to do it herself. I had the toy box ready, I had modeled the process for her, but whatever I put in the box she immediately removed. She is incredibly effective at making a mess, but totally incapable of cleaning.

In all honesty, I didn’t expect her to, and I really didn’t speak sternly to her—that would have been pointless and pretty silly.  Plus, I’d never be able to keep a straight face anyway.

This experience does, however, lend itself to a teachable moment for those of us who are older than the toddlers. I think that “The Lesson of the Toy Box” is the lesson of the cross. Humanity has made an awful mess of things. We have strewn our sin and our lives all over the place. As God looks down at the chaos sin has created I picture Him seeing it as I did my living room—a big mess. This time, however, it’s not plastic toys and wooden blocks, but lives and relationships that are shattered in the rubble of bad choices dumped from the “toy boxes” of our existence.

God could stand as a stern parent and demand that we pick up and clean up the mess we have made. After all, it’s not His mess, it’s ours. It certainly wasn’t fair that I had to pick up Twink’s mess, she is the one who destroyed the room. Anyone feeling sympathetic for me yet? Perhaps this will help you feel a little more sorry for me:

Guess what, however. This is the story behind the cross. A big mess that God knew we could not clean up on our own. Instead of demanding in futility that we straighten it up He did something unthinkable, and far more profound then my kneeling down to pick up those toys. He took the totality of the mess of humanity and put it on like a filthy soiled garment and with it was nailed to the cross at Calvary. 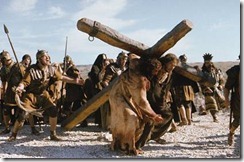 Read about how the prophet Isaiah described this centuries before the event at Calvary:

Isaiah 53.3-8
3 He was despised and rejected by men, a man of suffering who knew what sickness was. He was like one people turned away from; He was despised, and we didn’t value Him. 4 Yet He Himself bore our sicknesses, and He carried our pains; but we in turn regarded Him stricken, struck down by God, and afflicted. 5 But He was pierced because of our transgressions, crushed because of our iniquities; punishment for our peace was on Him, and we are healed by His wounds.

6 We all went astray like sheep; we all have turned to our own way; and the Lord has punished Him for the iniquity of us all.
7 He was oppressed and afflicted, yet He did not open His mouth. Like a lamb led to the slaughter and like a sheep silent before her shearers, He did not open His mouth.
8 He was taken away because of oppression and judgment; and who considered His fate? For He was cut off from the land of the living; He was struck because of My people’s rebellion.

Twink’s mess seems a whole lot less significant to me all of the sudden. Now I am vividly aware of my own mess and the price that Jesus Christ paid for me. There is no comparison…not even close.

Oh, and one more thing that I need to point out:

I know it’s just a messy floor and a simple toy box to some, but thinking about it has drawn my heart and attention once more to that cross on a hill where I am reminded that…[my paraphrase of Romans 5.8].

Question: Why not bring your mess, whatever it is, to Him?