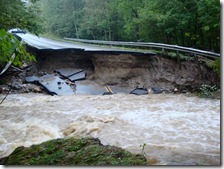 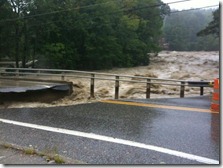 Most of you know by now that Vermont experienced significant damage from Hurricane Irene recently. Homes, business, roads and entire communities have been devastated by the sudden surge of normally small streams. As I have traveled in our area of the state recently I was awed, shocked, and saddened by the scenes of destruction. Several times I have had to turn of the television, shut off the computer, stop looking at the images, and just catch my breath.

Talking to people who have suffered loss has been challenging too. So many of the people in the small towns around us, Cavendish, Proctorsville, Weathersfield, Reading, and more seem to almost be living on auto-pilot. Some have a determination and will that seems to be able to rise up in the midst of the ruin, but many others are suffering, often silently amid the loss. A farmer I met below Cuttingsville talked of losing some cows in the rushing torrent and crops that are lost for the harvest. The possessions and property of so many people litter the stream and river beds of these communities now.

Something else I have noticed in my travels are the river rocks that have been scattered and moved in so many places. Fields and lawns that were once lush and green are covered with stones and mud from the riverbed In some places enormous boulders were shoved aside by the strength of the flooding rivers. And of course we know that some of those historic covered bridges, many other bridges, and large sections of road were washed away in the raging waters. The magnitude of might that was demonstrated by the floods was utterly awesome.

Something else struck me as I drove to and from Rutland yesterday. In some places the course of the rivers have changed. Near where I was speaking with the farmer I noticed a dog running through and playing in a section of the river which now flowed through the field near the road and under the back of an older home nearby. In another place I saw the river fork where just days earlier it had been a single flow. Large tractors and land-movers were in some of the rivers and streams near Rutland digging out and realigning the course of the water. The flood has changed things.

Sometimes we find that the course of our life changes, perhaps as unexpectedly as the flood. We all know that things can get rocky at times, and perhaps the “rush of life” can become intense as well, but there may be a time when everything suddenly changes and the flow of your life goes in a different direction. These times of transition and change can be bewildering and confusing. Like so many of the people I have seen in the past few days there is a sense of shock and loss with what’s been left behind after these changes.

I think we have a choice at times like this. We can choose to fight the change, to stand in the raging stream of life and boldly proclaim against the force, I will not be moved. However, that didn’t work well for even the largest of boulders in the flood. The other option we have is to surrender to the flow and let the course be altered. It’s times like this that faith plays such a critical role, because through faith I know I can have the strength to stand and remain in the crush of the rush if that is God’s will, and I can have the serenity of accepting the changes if God so desires.

So, through the streams and rivers of life, and the bends and curves in our journey, the critical of element will enable us to experience peace even in the tempest, and strength even in times of trial.

Special thanks to the multitudes of volunteers, rescue workers, National Guard troops, and myriads of others who are doing whatever they can to assist in the clean-up, recovery, and restoration.  We appreciate all that you are doing and are so grateful for you.