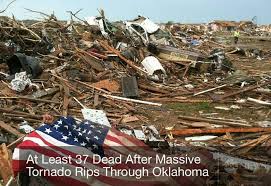 Like most of the nation I grieve and ache today for the people of Moore, Oklahoma.  We’ve seen these images of destruction and devastation cross our television and computer screens.  I can’t comprehend of the suffering and loss that the families of that community are facing today.  At times it’s overwhelming to me, and I am hundreds of miles removed from the catastrophe.

Like most of you I want to respond…to do something.  Here are some suggestions if you are burdened for the communities that have been ravaged by the tornados.

First, pray.  I know that many would see that as a powerless response, but I am sure that I have heard no less than a dozen times the people of that area ask for our prayers.  How selfish of us not to respond to that plea.  Ask God for comfort for those who have faced this storm.  Ask God for protection and strength for the people responding on the ground.

Second, give.  I would like to recommend that you give to the Southern Baptist Disaster Relief effort.  This is the second largest team of trained disaster responders in the nation.  100% of what is given will go directly to fund efforts at the disaster site.  You could also give to the Red Cross or Salvation Army.  For some, this is one way to be involved in helping people put things back together.

Third, go.  Some may have the resources and ability to go and serve on the scene with those impacted by the storms.  I would urge you to do this in connection with one of the agencies on location.  It is NOT a wise idea to just go running off without the guidance of the trained experts.  I am sure that your efforts would be appreciated and they would best know how to use what you can provide.

With so much destruction and loss I was growing weary of the news coverage as my heart broke with each new story and update.  However, I found this little news clip that reminds me that there is hope, even for the “least of these.”

May God shower grace and comfort on those impacted by this tragedy.