PRAYER – Getting Your Bearings

The Priority of Prayer

I’m officially a child of a previous generation. I have enjoyed technology, and I think I do fairly well on my computer. However, text messaging on my cell phone is still pretty illusive. I watch the kids texting whole paragraphs in the time it takes me to type in a sentence. I remember with great fondness when a phone was just a phone.

The other piece of technology that I find I am warring against is the GPS navigator. So far I have been able to avoid getting one. It’s not so much that I am against it, I just don’t see the need. My aunt and uncle–several years my senior–have one now. I was quite surprised by the addition to their windshield when they came to visit us in Florida a couple years ago.

My first experience following the directions of their GPS didn’t help my doubts about the device. We were heading to Florida from Vermont and following behind them as they listened to the directions the little box dictated. Everything was going well until we hit New Jersey. For some reason the device sent us off the interstate into downtown Newark. Within a few minutes of getting off the interstate my car was involved in an accident that forced me to leave my car in New Jersey for three weeks. I was, needless to say, less than thrilled with the performance of the gadget.

However, the same device did bring me and my uncle directly to the body shop three weeks later when I returned for my recently repaired car. In fact, that trip was so easy and smooth that I actually stop now and look over the instruments in the display at the electronics store. I have not bought one yet. 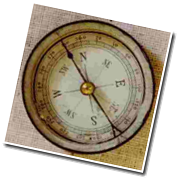 As a young man hiking we had a very primitive form of GPS. It was called a compass. The compass functioned by keying in on magnetic north. We learned how to use the compass to identify direction and to keep tabs on the way we had traveled so that we would be able to find our way back to the beginning of the trail if we needed to. Our last minivan actually had a built in digital compass. That came in handy a few times when I was caught “taking the scenic route” traveling with my family.

These navigational instruments are intended to help us in our journey by keeping us on the right course. However, you have to make use of them if you want to benefit from having them. It does not good to have the compass in your pack, but never pull it out to get your bearings. There is no benefit in having the GPS device in your glove box, but refusing to make use of it.  In fact, as I think about that scenario I can’t help but wonder if that might become one of the arguments that my wife and might eventually have. Instead of, “why don’t you stop to ask directions?” she would instead be lamenting, “why don’t you plug in the GPS.” To which I, being a red blooded American man, would respond with that most used of lies, “I don’t need to do that, because I know exactly where I am and where I am going.”

(Next Post – Where Prayer Fits in for Getting our Bearings)