Moving back home and returning to the church where I grew up was at once comforting and disconcerting.  I love that church (I mean still to this day) , and they were there in some very formative times in my life.  At the same time I was struggling with truths that I read in the Scriptures and the directions of not just the church, but the denomination as a whole.

When we arrived we got deeply involved in the ministry of the church, and it was great for a while.  There was a young man there who was the pastor and he and I had a number of good discussions.  One of these discussions would, without my realizing, set the course for a major shift in my life in the next few years.

I was still struggling with whether God could seriously be calling me to ministry.  My wife and I had two wonderful children, and we—like most young families—had our fair share of struggles.  Looking back I see how the Lord was moving us in His plan—but at the time I totally unaware of it.  In fact, I had settled that I would be a good church member and teach high school English.  When I started attending college that was my intention.  Beginning college really seemed to help me settle on the course I HAD CHOSEN for my life.

At the same time I was starting college I was also seeking how my relationship with the Lord was going to function.  Determined at this point that ministry wasn’t a reality, I struggled to make the best of my life of compromise.  At the same time there was an aching and hunger in my life that I couldn’t figure out.  I thought I was doing all the right stuff, but I couldn’t shake the feeling that I was missing the most important thing.

Our marriage was ok, but it wasn’t awesome.  It wasn’t what I knew it could be, but I didn’t really know why.  We went to church every Sunday, taught Sunday School, sang in worship, did all the “church” stuff.  Occasionally I got to fill-in when the minister was away.  We were immersed in church as much as possible, but we were spiritually dry.

Almost a decade earlier I had been given a Bible as a gift by Rev. Jasper Steele.  He gave it to me after completing the Lay Speaker Course, commenting that I had been one of the youngest to be certified.  He had also told me that he was proud of the choice I made to follow God’s calling in my life.  I was honored, and it was (and still is) something that I treasure. 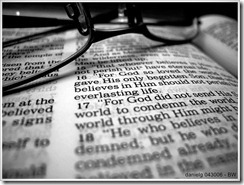 Unfortunately that Bible had spent most of the past several years on my shelf.  But now, in desperation and out of hunger I took it and started reading.  I had read a lot of the Bible in bits and pieces…passages here and there, but never cover to cover.  This time I was determined to do that.  I began with the Gospel of John and read from there to the end and then restarted at Genesis.

I had anticipated it taking me months to completely read through.  What shocked me then—and still—is that once I started I couldn’t stop.  I read through the entire Bible in about eight days.  I stayed up long after everyone else went to bed and got up before anyone else just to read the Bible.  To this day I will pull that Bible down and read from it when I sense that I’m getting that “dryness” in my spirit.  It’s not some radically different translation or super-special version.  It’s a reminder of how I found that amazing soul-satisfaction in those pages.  It’s marked, written, and worn, but I love it, and I love what that time meant.

Now, as soul-satisfying as those hours and days in the Bible were for me, they also opened up some pretty uncomfortable things for me, and forced me to wrestle and struggle with areas in my life, marriage, parenting, and church that I had not had to face because I was largely ignorant before God’s Word started bringing clarity into my world, and more specifically my world-view.  The way I saw things to that point was being challenged by what I read.

When I asked my pastor about this I received what to this date has been among the most heart-breaking of things I’ve ever heard.  He basically replied that the Bible had been written so long ago that much of it didn’t apply any longer to life in the world.  Something inside of me cringed—and still cringes—at that thought.  If the Bible doesn’t apply, then the promises that we claim can’t be trusted.

As I voiced my concern to other people they essentially gave me a kind of knowing nod and assumed I would “come out of the phase.”  It’s been twenty years, and by God’s grace and in the power of His spirit I pray I will never “come out of this phase!”

Through a series of turning points and trials Andie and I sought whatever it was that we were missing in our marriage, in our spirits, in our lives.  In a surprise decision and move we packed up everything we owned, which wasn’t very much, loaded it into the back of an Overnite Freight Truck and sent it ahead of us from Rensselaer, New York to Clarksburg, West Virginia.  A move away from our family and all that was familiar, we would later discover was a move into the cadence of the Holy Spirit as God drew us into the greatest adventure of our lives.

We left the expanse and comfort of my grandmother’s three bedroom house and moved our family of four into a—tiny would be a very generous description—one bedroom apartment on top of a garage.  Even the address sounded a little fishy at first.  122 1/2 Tuna Street.  Looking back across the years, however, those few years in that tiny apartment were some of the best years in the life of our little family.  I wouldn’t trade them for anything, and often wish we could return to the simplicity of our little home.

Learn why in the next edition.  (to be continued…)