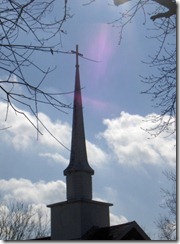 I thought I might take the next several BLOG postings and share a little more about myself and why I am who I am and where I am.  I hope you will find these next few BLOG postings both informative and inspiring.

I am a Christian by Birth.  (Rebirth that is)

No, that doesn’t mean that I was born a Christian, but rather I was “born again” a Christian.  There was a time in my life that I knew about Jesus, but had not allowed Him into my Life.  I was religious, but I didn’t have a relationship with Him.

Here’s a Bit of My Story

I had grown up going to church.  By the time I was in my early teens I could easily recite most of the readings and sing most of the hymns of our church from memory.  I really enjoyed church and all the things that were related to church.  I loved hearing and learning about God and Jesus and the characters of the Bible.  I liked the people at church.  Most of them were much older, but I had a lot of respect for them.  Much of my family attended the church—and still does.  It was a comfortable and inviting place and I liked being there as often as I could be.

As much as I loved going to church and being in church I was beginning to feel a disconnect in my life between the things I was encountering in my world and what I was hearing on Sunday in church.  It was becoming a real struggle, and I was gradually slipping into behaviors that were not good.  I was skipping school, becoming rebellious at home, and headed down a pretty dark path.  When I would try to stop I only ended up further frustrated.

I wasn’t robbing banks or knocking over liquor stores.  I hadn’t fallen prey to illicit drugs or heavy drinking.  By all appearance I probably looked like a pretty good kid on the outside.  Inside, however was a different story.  The first few years of Junior High and High School really took a toll on me.  I didn’t realize it at the time, but years later I would recognize that I was struggling with depression and deep feelings of guilt and frustration.

The time came when I couldn’t find peace, comfort, happiness anywhere with just three exceptions.  The church where I had grown up hearing about God, youth events and retreats held throughout the year, and finally the summer church camp that I attended each year.  As these events came and went I would experience the build of excitement and enthusiasm leading up to the event, and then the eventual let down as the event ended and life returned to normal.

Something big in my life was missing.  I knew it, but I didn’t know what it was.  It couldn’t possibly be God because I was doing all the God stuff, it just wasn’t making a difference.  It wasn’t having any lasting effect.  The depression and discouragement sank in deeper and deeper.

In addition to struggling with the things I mentioned I was also feeling more and more like I was disappointing everyone around me.  My grades were suffering and I was skipping school.  I was becoming argumentative at home.  Guys who had been my friends moved on to other things.  It seemed like even my dog didn’t want anything to do with me.

The breaking point came for me when the girl that I had really—I mean really liked—turned out to only be interested in me because of one of the guys I had been friends with.  I had really believed that she liked me, and when she went with him and left me in the dust it was more than I knew how to handle.  I have had low times since then, but I believe there had not been any time in my life where I was as low as that moment.

Where I grew up there was a bridge over the railroad tracks—for those who know my home town it was the Herrick Street Bridge just across from the what used to be St. John’s School.  I had delivered papers in that area for a couple years and I liked the bridge.  It was old and rusted, had been burned a time or two, but it had character.  As I sat on the little bridge over the creek in front of my house, tears burning my eyes, that bridge flashed in my mind.  So I got up from where I had sat and walked to Herrick Street.  I had more determination in that moment for what I purposed then I had mustered up for anything in a long time.

I got to the bridge and climbed up the iron structure to the highest point on the bridge.  I don’t know how far it was from the top to the ground below, but I was pretty sure it was sufficient.  I sat there for a long time—an hour or more—thinking about a lot of things.  My mind swirled with the multitude of people I had let down, the many ways I had failed, and the love that I knew I would never experience.  Years later I would watch Jimmy Stewart as George Bailey in It’s a Wonderful Life have a similar “Bridge Experience.”  This was my George Bailey bridge experience, and there wasn’t a “Clarence” there talking me out of it.  I was resolved that the best thing—really the only thing I could do is jump from that bridge.  People might be sad for a while, but in a short while they would all be fine and better off for it.

I can’t explain what happened next any other way then to say God broke through in my life.  At that time and in that place, amid all the despondency and grief I was feeling, God moved in my broken heart.  It was as if God were saying that—even though no one else would love me (ofcourse I know that was never the truth, but couldn’t see it at that point) He would always love me and had always loved me.

That brief passing thought gave me enough strength and hope to come down from that bridge and go one more day.  I got out my GOOD NEWS BIBLE and read.  I read the Gospel of John, Acts, and I didn’t stop until I hit Romans chapter five verse eight.  That verse then and still today defined for me what God’s love really means.

Romans 5:8 – But God proves His own love for us in that while we were still sinners Christ died for us!

I might have disappointed everyone around me.  But God loved me even when I was a sinner, and the sacrifice of Christ occurred for me, and for everyone, even though we were sinful and unworthy.  It’s not now or ever because of our worth or merit, but because of the depth of God’s unconditional and unbelievable love for us.

There was not preacher or evangelist there.  There was not Gospel tract or specific prayer.  There was not trumpet fanfare or chorus of angels (that I could hear).  Just me, bowing my head and turning my heart and life over into the hands of this God who had shown me the depth of His love.  That night my life changed.

Terms like “born-again” and “saved” hadn’t yet entered my vocabulary.  What I knew then and still know now, is that God had given His Son, Jesus, for me as a gift of Love.  From that point on the songs that we sang took on a new and deeper meaning.  The words of the Bible really did relate to my life.  What the pastor said had an impact on me personally.  Later on I would understand with great depth two scriptures that reflect

2 Corinthians 5:17
17 Therefore if anyone is in Christ, there is a new creation; old things have passed away, and look, new things have come.

Ephesians 2:1-5 (HCSB)
1 And you were dead in your trespasses and sins 2 in which you previously walked according to this worldly age, according to the ruler of the atmospheric domain, the spirit now working in the disobedient.
3 We too all previously lived among them in our fleshly desires, carrying out the inclinations of our flesh and thoughts, and by nature we were children under wrath, as the others were also. 4 But God, who is abundant in mercy, because of His great love that He had for us,
5 made us alive with the Messiah even though we were dead in trespasses. By grace you are saved!

I had known what it felt like to be dead…heart dead…soul dead…spirit dead.  Now I was made alive again.  I had been resuscitated in this new life with Christ.  I was born into this world on my original birthday, but I had now been born into life and out of this world through Christ.